What Is Physical Bullying and How to Prevent It?

Positive Action Staff
•
Bullying
You’ve probably faced some form of physical bullying at one point or another in your school life — or known someone who has been a victim.

The saddest part is that bullying can have long-term damaging effects on its victims. It can affect them physically, socially, mentally, academically, and emotionally well into the future.

As much as you try to eliminate physical bullying from your school, it may feel like you’re fighting a losing battle. We understand.

What you need is a winning game plan against this pervasive problem. And we’re here to provide you with one.

But first, let’s take a more in-depth look at what constitutes physical bullying.

What Types of Bullying Behavior Count as Physical Bullying?

Physical bullying is the use of physical actions to intimidate and gain control over a target. The physical actions are unwanted by the victim and can either cause damage to their body or possessions. This behavior is all too common in schools. According to the National Center for Education Statistics, 6.7% of students in the 2016-2017 school year were physically bullied.

Some common types of violence enacted through physical bullying include:

Physical bullying (and other types of bullying) differ from mean actions in the following ways:

What Effects Does Physical Bullying Have?

As with all types of bullying, physical bullying eventually takes its toll on both the victims and the bullies.

Effects of Bullying on the Target

Bullying leads to a decrease in academic performance. A study by CDC researchers showed that 12.9% of teenagers who missed school due to safety concerns feared bullying.

Victims of bullying may also avoid participating in class for fear of drawing attention to themselves and getting bullied. They may then become labeled as low achievers, putting them at an even higher risk of being targeted by bullies.

Like all forms of bullying, physical bullying can cause emotional distress. It makes the victims feel powerless and think less of themselves. This leads to feelings of shame, isolation, and despair.

The child may lose interest in playing or activities they previously enjoyed and engage in harmful behavior, such as self-harm and reclusive tendencies.

These actions lead to more negative feelings and thoughts, creating a self-destructive cycle. In victims with existing depression and anxiety, bullying can make these conditions worse.

Besides the physical injuries victims may sustain from the attacks, they may also develop health issues, such as somatization.

Somatization includes physical symptoms caused by psychological or emotional factors. For instance, the child may complain about headaches, body pain, or fatigue.

Effects of Bullying on the Bully

Those who bully others are also likely to face serious behavioral problems. They are at higher risk of later developing substance abuse issues and engaging in violent behavior, such as theft, and vandalism.

Compared to children and adolescents who have only been victims, bullies who have been victims themselves tend to face severe negative effects on their mental health. These effects carry over into adulthood and include suicide tendencies. The bully may also experience poor social skills and high levels of aggression.

You can recognize instances of physical bullying in your school by remaining on the lookout for these negative emotional, academic, and behavioral changes in your students.

4 Tactics of Physical Bullying Prevention in Your School

Here are some remedies that can reduce physical bullying in schools.

The first step is to increase awareness of the different forms physical bullying takes. Ensure that students, teachers, and other staff can recognize it, even in its subtlest forms.

When defining bullying, it’s best to remove the labels.

Everyone has baggage. Even children. There is likely a reason the child bullying another is acting in that way.

Rather than labeling one student ‘bully’ and the other ‘victim’, it’s best to focus on the negative behaviors and consequences.

This will make it easier to teach students to report bullying when they witness it without passing harsh judgment on the student carrying it out.

Bullies will understand the kind of harm their actions are causing the victim and the negative impacts they are drawing on themselves.

A study at the University of Western Sydney indicated a relationship between self-concept and bullying. The study showed that both bullies and targets are associated with a low self-concept.

The following findings were derived from the study:

From these results, it’s safe to say that one long-term solution to reducing all types of bullying in schools is to promote a high self-concept among students.

The perception we have of ourselves is generally determined by the actions we take and less by our thoughts and feelings. While positive behavioral choices increase feelings of self-worth, negative choices result in a negative self-concept.

How can you develop a positive self-concept among students?

Our bullying curriculum is based on the philosophy of the Thoughts-Actions-Feelings Circle.

This positive cycle promotes a high self-concept and lower incidences of bullying. The curriculum covers students of all ages, from middle school to high school students.

3. Create a Sense of Community

Find opportunities to create a strong classroom community. This creates an environment where students feel connected to their peers and safe to be themselves.

This connection between peers can reduce incidents of school bullying while also promoting healing among victims. It can also motivate students to speak up when they witness bullying.

Engage in community-building afterschool activities that relate to their interests while also promoting social-emotional learning.

It helps the students appreciate their identity and uniqueness and that of their peers. Create activities where students can develop their problem-solving skills and learn how to work through conflicts.

Teach them to be empathetic. Empathy goes a long way in helping students understand their peers and reduce bullying incidents.

You should also strive to build an emotional connection with your students.

Connect with them on an individual level. Offer support and show that you care about their welfare.

This will keep communication open and encourage those who witness or experience bullying to report to you.

4. Be on the Lookout for Gateway Indicators of Bullying

A student is unlikely to become a bully overnight. They will display some initial bullying behaviors that teachers and staff often dismiss as “kids being kids”. These behaviors are known as “gateway indicators”.

They signal the beginning of more intentional bullying.

Here are a few examples of gateway indicators:

These behaviors make bullying seem normal in the eyes of the students.

And although there are no hard rules to mitigate gateway indicators, stopping the kids at this point prevents these behaviors from escalating to a bigger bullying problem.

Respond to them in a way that shows they are wrong. For instance, talk about how the actions hurt the recipient’s feelings.

It’s Time to Reform Your School

Bullying prevention in schools is of utmost importance.

Physical bullying hurts student performance and has long-term behavioral, emotional, and psychological effects. And this applies to both the bullies and their targets.

You need a long-term and consistent strategy that will prevent bullying while also helping students become well-rounded individuals.

Get the cost-effective Whole-School Reform Model by Positive Action. It will promote a safe learning environment in your school and help eliminate bullying through:

Take the first step to ensuring that no bullying occurs on your school grounds by training your staff through the Positive Action educational program.

What is Verbal Bullying & How to Prevent It? [A Complete Gu... 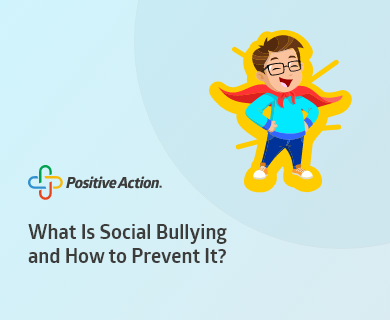 What Is Social Bullying and How to Prevent It? 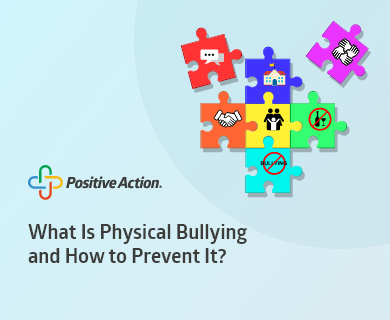 3 Essential Ways to Prevent Bullying in Schools in 2022